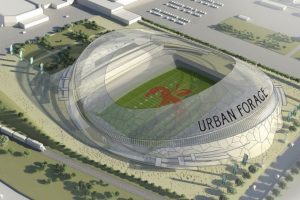 So we have this building permit, and

everyone knows how hard it is to get one in the city of Minneapolis.  Some people have asked me how we were able to do this.

Well, it required a bit of reconceptualizing and rebranding.

For a long time, even in the old days before the Surly bill, people thought of taprooms and tasting rooms as bars or taverns.  They were places to meet your friends and have a drink and maybe play some darts or pool.  But I am asking everyone to think bigger.

Drinking, and particularly cider drinking, is a sport.  A major league sport.  And taprooms are more rightly considered stadiums where that sport is played.

So when I approached building officials and council persons, I told them that what I envisioned was not a taproom, but a stadium.  The first stadium in Minneapolis for a brand new franchise in the Major League Booze Association.  And that I was about to move my franchise to Los Angeles or maybe Dallas if I didn’t get a building permit pronto.  And some pretty generous subsidies.

I walked out with a building permit and an undisclosed amount of unmarked bills in a paper bag.  So instead of a cozy little taproom on East Lake Street, plan to see a soaring glass-roofed stadium begin construction soon.  Yes, we may have to demolish a few houses and stuff, but if they’re not yours, really it’s not that big of a deal.

Until our stadium begins construction, you may purchase bottles from us on Fridays from 3-7 pm and Saturdays from 1-5 pm in the basement of our humble building at 3016 East Lake Street. We’re always glad to see you.  And please begin practicing your cider pong skills.  It’s like beer pong, but with cider.  And it’s Major League.

Oh- and by the way-
In case you’re still taking me seriously, or you happen to be our lawyer-

1. Drinking isn’t a sport.  Please use common sense when drinking alcohol.
2. The city didn’t give us any money.  We had to work our tails off to get this permit.
3. We’re not tearing down anyone’s house.  That isn’t nice.
4. Yes, it will be a cozy little taproom, not a stadium.