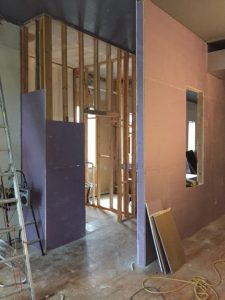 First week of August- where is our taproom?

Well–  new handrails have been installed on the newly truncated front steps, so the exterior work is done except for the painting and exterior lighting.  We’re focusing on the indoors now.  Ductwork for the new heating and cooling system is going in as we speak, and the electricians are running more wire to get it working, as well as connecting our new chairlift, which is now running and just needs a few final touches.

Wall framing and bathroom electrical has passed inspection, and drywall is now starting to go up.

We’re still pulling out sheetrock and floorboards here and there for the plumbers, but we’ve been doing mercifully less demolition lately.  Good, as tearing things out was starting to get really old.  Something I never thought I’d get tired of.

We continue to sell cider for life memberships and CSA memberships- a great value for you, and a way for us to fund the final push on this taproom without breaking the bank.  Interested.  Sign up for more info here!