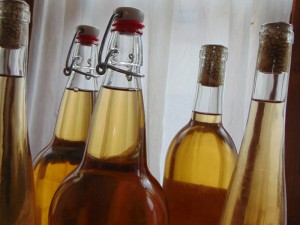 And a lot of questions.  Such as:

Are you gonna grow your own grapes?

No, we’re not.  As a matter of fact we’re hardly even going to use any grapes.  A little bit of grape juice is good.  It adds some sugar, tartaric acid and maybe  some tannin, but it’s by no means the only fruit that wine can be made from.

We will be using a lot of apples and dandelions and honey and rhubarb, but we won’t be growing most of those either.  We planted a bucketload of rhubarb in our backyard this spring, but we’ll still need to supplement that with foraged rhubarb.

Foraging is like dumpster diving, right?  Isn’t that kind of gross?

No, urban foraging is not the same thing as dumpster diving,

It’s collecting fruit that’s being grown locally but not being used, and putting it to work.  That means picking it off of trees, or working with people who are willing to bring it to us from their backyard, or visiting a store produce manager to pick up unsold fruit before it goes to waste.

There are a lot of things that make good wine, so we can be flexible as to what we use for our wines, ciders and meads.  The flavors of the product will vary from year to year, depending on what type of fruit was available, where the fruit came from and how it was grown.  If you want to taste the terroir of southern Minnesota, this is how to do it.

Are you opening a taproom?

If we can, we will.  Right now, if we apply for and receive a winery license, we can’t.  Minnesota law doesn’t allow wineries that are not located on a farm of three acres or more to have a taproom or do on-site sales.  And they charge urban wineries 10 times the fee that they charge farm wineries.   I will spare you my editorial opinion on why that is the case because I can rant on this for a while, but would rather not.

I spent a good deal of time this last winter lobbying to level the playing field between urban and rural wineries and learned a number of lessons about the working of the political process which I’ll put to work next time I try to change the law.

Because there will be a next time.  And eventually we will have a taproom if I have anything to say about it.

So why don’t you just buy a farm and have a farm winery?

There has been a boom in new micro-breweries in Minneapolis and Saint Paul in the last couple of years which has been absolutely fantastic for the cultural and social life of the city, not to mention the quality of the fermented products in the area.  I think there’s more than enough room for makers of other beverages here.  There are 3 million people in the metro area, and not all of them are beer drinkers.

There are also already a number of farm wineries in the state, and they’re providing a very different service than we will be.  They’re destinations to visit- a special place to go on the weekend, or a short road trip destination.  Farm wineries are adding something unique and special to Minnesota’s cultural life and beverage selection too- but are not the sort of place that a person would stop by for a happy hour, or walk over to check out what’s new in the fermenters this week.  That’s the niche we want to fill.

So are you completely nuts to be doing this?

You tell me.   Personally, I think the idea is fantastic.

I’ve been making wine and cider from foraged fruit in my basement for over 20 years now.  It’s very much possible, and the wine is pretty darn good.   Scaling up production to a commercial level may be challenging, and we’re already dealing with the legal obstacles that come with the territory, but once we get past that, we’re in the clear.

Yes, there are risks, as there are in any endeavor.  But a little risk keeps life interesting, no?