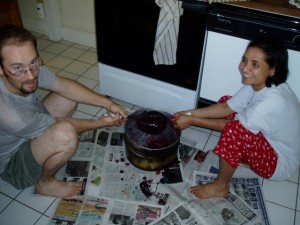 When Urban Forage Winery and Cider House opens we will:

Source our fruit locally and sustainably:

We plan to gather fruit from urban apple trees and raspberry bushes.  We hope to intercept useable but not saleable fruit from food co-ops and natural food stores that would otherwise go to waste and ferment it into something delicious.

There are a whole range of tasty beverages on the spectrum somewhere between grape wine and beer that rarely ever make it to store shelves.  This includes honey mead, dandelion wine, sparkling apple cider and pear champagne.  We’ll put them on the shelves and make sure they get the attention they deserve.

Make wine in the city for city people:

Our winery will be on Lake Street in South Minneapolis, so that’s the primary area in which we wish to distribute.  Saint Paul and Northeast and North Minneapolis are also on the radar.  If there’s any left over, we could distribute that to the suburbs.

Someday, we’d like to be able to have a taproom.  We’ll have to change the law that currently limits them to rural areas, but that’s a topic for another day.  We’d also like to be able to have apple or dandelion-gathering events where interested community members spend part of a day picking fruit or flowers, then bring them to the winery to make a batch of dandelion wine.